I almost didn't make it.

I underestimated my travel time on the Eisenhower Expressway into the city as I had assumed that an hour and forty-five minutes would have been enough to get me near the University of Chicago campus. The bumper to bumper traffic had me moving an average of 5-10 mph, and I eventually hit that point where the initial excitement of what was about to happen started to wear off, and the stress of the rush hour took hold.

I think the destination address changed as I got closer, but I'm not entirely sure. The last twenty minutes of driving became a blur as I hurried to stay on the road and re-program the desitination into my phones map. And of course, getting there was one thing, finding parking was another.

I was in constant contact with Nei, assuring him I was close, and that I would be there soon. Street parking was non-existent, but I happened across a parking garage that would have to suffice. I hit the button to release my ticket, and spun in to the first spot I could find.

I hustled my way to the library, where Nei met me on the steps, and we made our way inside to greet the others.

"Hi everyone. Thanks for waiting."

It was exactly one year ago today.

I was a member of the AMPt Community Leadership team, a collective of passionate, talented photographers that shot strictly with a mobile device. The traveller, and fellow team member who I met up with in Chicago, was Nei Cruz. We'd known each other through our shared interest in photography, community, and from providing an outlet and safe space for ceatives to share their images with others around the world. By all accounts, we'd hoped, but never assumed that we'd actually get to meet face to face someday.

This is the story of that day.

The meetup was arranged by Geny Baluyot (@genyvb). She travelled to Chicago from Dubai, and had connected with a fellow photographer on the University of Chicago campus by the name of @okjey. He was our tour guide for the day. The above is a pic of him leading us into our first site. He was a gracious host, and got us guest passes for the day.

that shot everyone took.

The research pavillion was stunning. As I jockeyed for position amongst the students and fellow photographers, it became apparent that the shot to get, was the shot everyone wants to get. I tried to look at the room from different angles, find the small details, the different textures, even the damn drinking fountain, but the buildings architect Helmut Jahn clearly wanted me to capture the expanse of the room as a whole. The gestalt.

"it's not that exciting, they're just lights."

Before departing the library, I snagged this shot near the desk where we all met up. An employee noticed me shooting, and had to share his two cents. "It's not that exciting, they're just lights",  he said. - I beg to differ. There's more than meets the eye in this simple setup. The leading lines, the intense presence of geometric shapes, the contrast in texture. I was a little taken aback at the sentiment, but I suppose if you see it everyday, it's not so special. Interesting how we can lose perspective.

entrance to the main quadrangle.

After our time in the library, @okjey lead us out into the quad. It was a chilly day, overcast, but thankfully no rain. The light was cooperative, and created the mood in each of my pics. From left to right are @okjey, @genyvb's sister Hannah, @genyvb, @nei.cruz, and @ericmueller.

on the steps of stuart hall.

Periodically, we all took a few moments to regroup, check out our collection of photos, and perhaps try a quick edit. Here is @genyvb grabbing just such a moment. We were in between buildings, waiting for our group to reconvene before moving on. The campus boasts both gothic and contemporary architecture. The gothic elements surrounded the main quad and share a rich history established in 1890.

The cold exterior of the architecture was reflected on the interior of the first set of buildings we entered. The color palette was neutral, dull, and the guts were mostly utilitarian.

The facade of the rockefeller Chapel, although reminiscent of the tan buildings on the main quad, hid a wonderful surprise inside.

interior of the rockefeller memorial chapel. 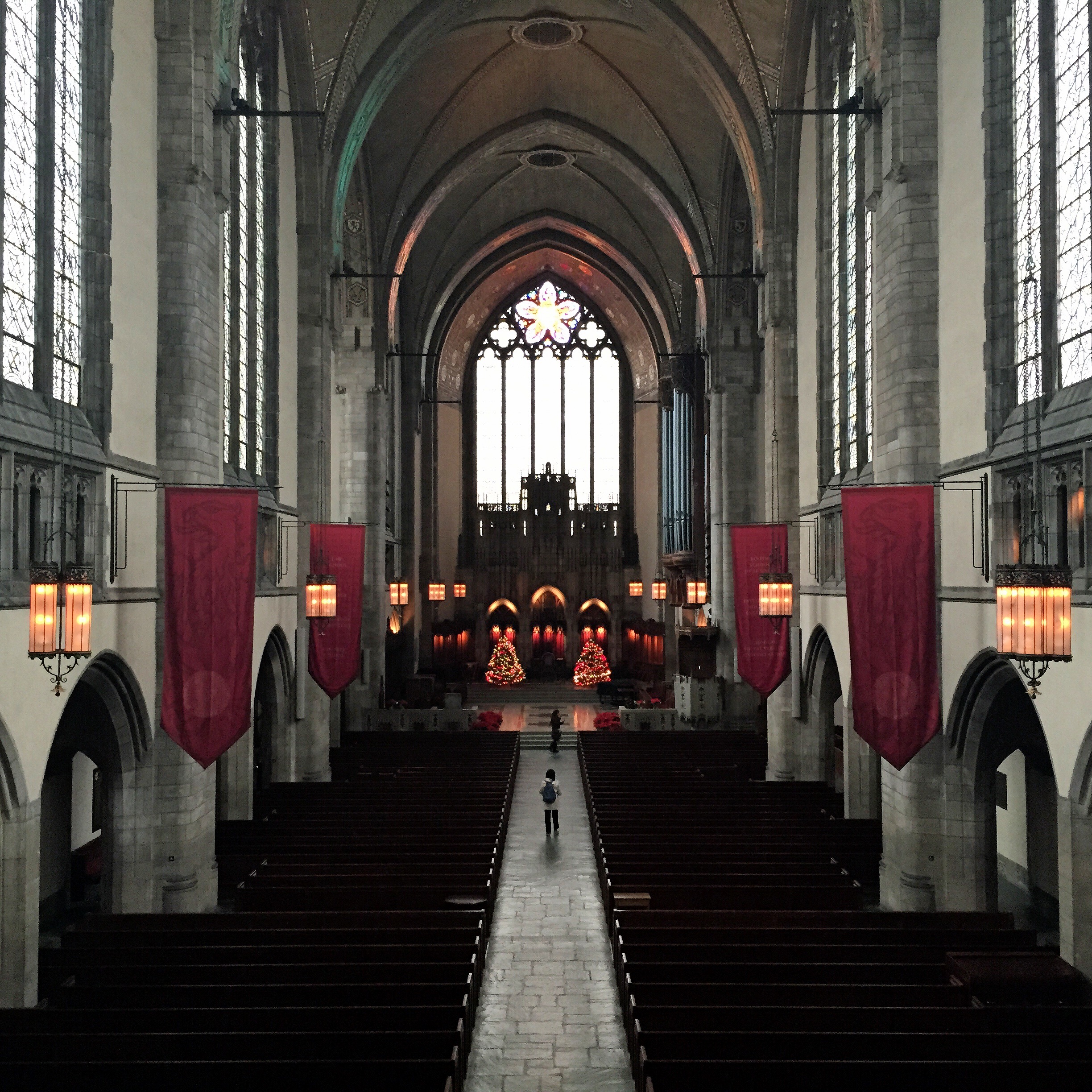 At this time of year, most students have travelled back home for the holidays. For us, this meant that the buildings we entered were rather empty, including the chapel. We walked through, respectfully quiet, exploring the aisles, the balconies, & the holiday decorations.

nei cruz, inside the chapel.

I was able to snag Nei for a photo shot from the front of the chapel. I was learning as I went. After all, this was my first photowalk. Nei was much more comfortable directing others and knowing which shots to get. In addition to being a supporter of my work, I learned a bunch from Nei by just watching him work. I'm used to being at home in my studio, controlling the aspects of my shot, tweaking the details of a still life. This outing opened my eyes and gave me great perspective on shooting in a different setting.

In the center of the Booth School of Business was this large square space. I loved the lines of the staircase, and the natural light that shone in from above. the ceiling was stunning and a geometric masterpiece. None of my images did any justice to it. Eric and Nei got much better shots as they laid on the floor to keep the lines of the ceiling framework square.

We eventually connected with Jason Peterson, Craig Hensel, Kevin Kuster, and a few others. (Please forgive me, it all happened so fast, I didn't have time to chat and get everyone's name.) We headed away from their office building and out though the streets of Chicago. Our route brought us under the "L", and wound around to the Maggie Daley ice ribbon.

Although the walk was hurried I managed to get this shot of the Lower Randolph underground walkway system.

logan center for the arts.

The credit for this shot belongs to Nei Cruz. He directed Eric (foreground) and Geny (by the window), I simply capitalized on the opportunity. The full view of this scene would place me taking this directly above him in this great theater space. 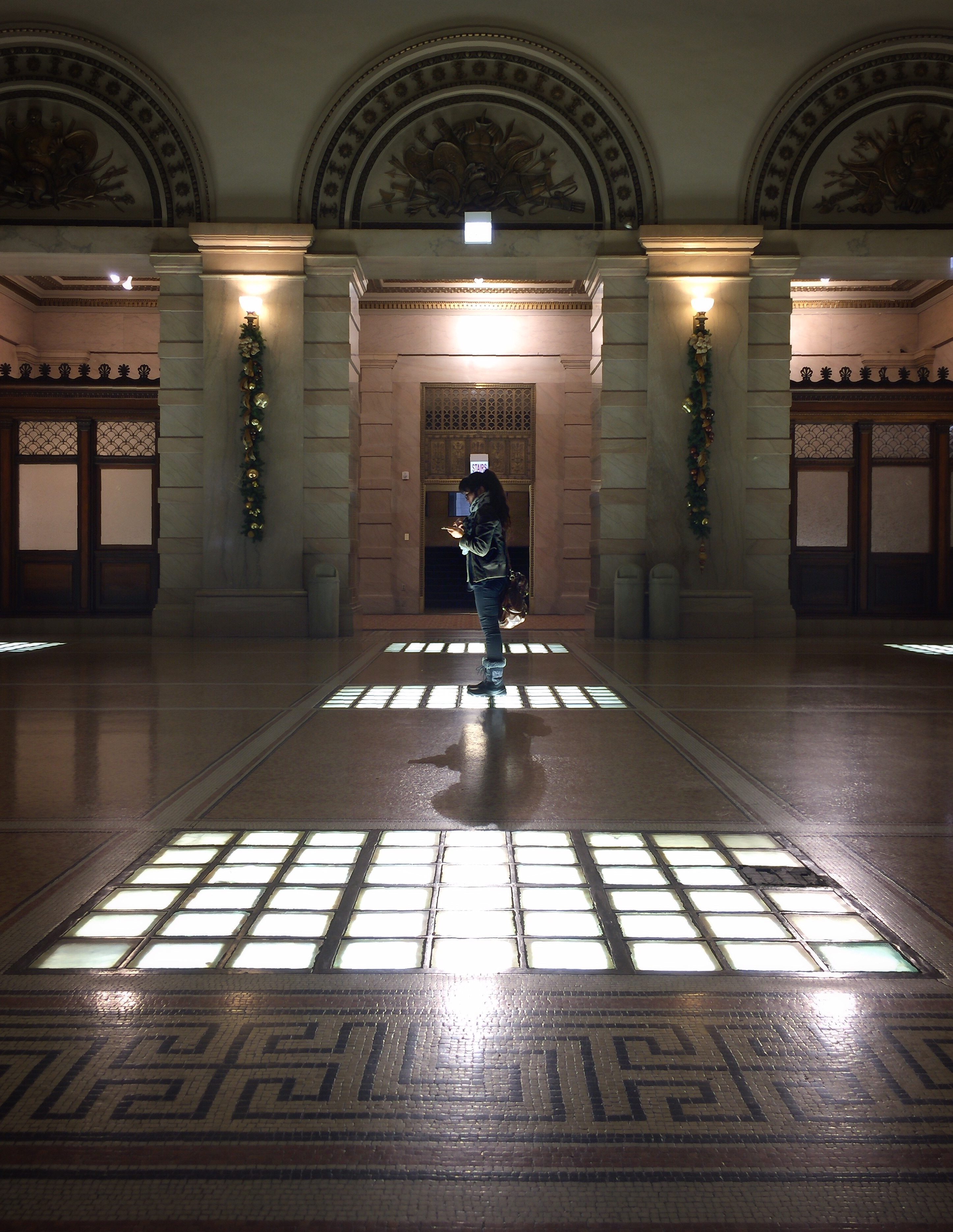 If you're ever in Chicago, the cultural center is definitely a place to check out. Opened in 1897, the building is stunning, inside and out. A google image search will show this to be true. I didn't have to say a word for this shot. From my recollection, Geny was standing on those lights to capture her own image. This was photographed through a doorway to an adjacent room.

We made our way to Millenium Park, Cloud Gate (aka the bean), Crown Fountain, and also met up with Mary (@misseswray). I eventually sat down for a solo drink and chat with Nei. But I had captured all I wanted for the day. Every other pic I tried felt forced, or didn't fair well in the editing process.

The images in this collection reflect the parts of the day where I connected, learned, and shared an experience with others. I learned a lot about myself, and met some really great folks along the way. Nei was just as I had known him to be. Genuine, supportive, a true friend. I end this story where it began.

That shot everyone took in the research pavillion. 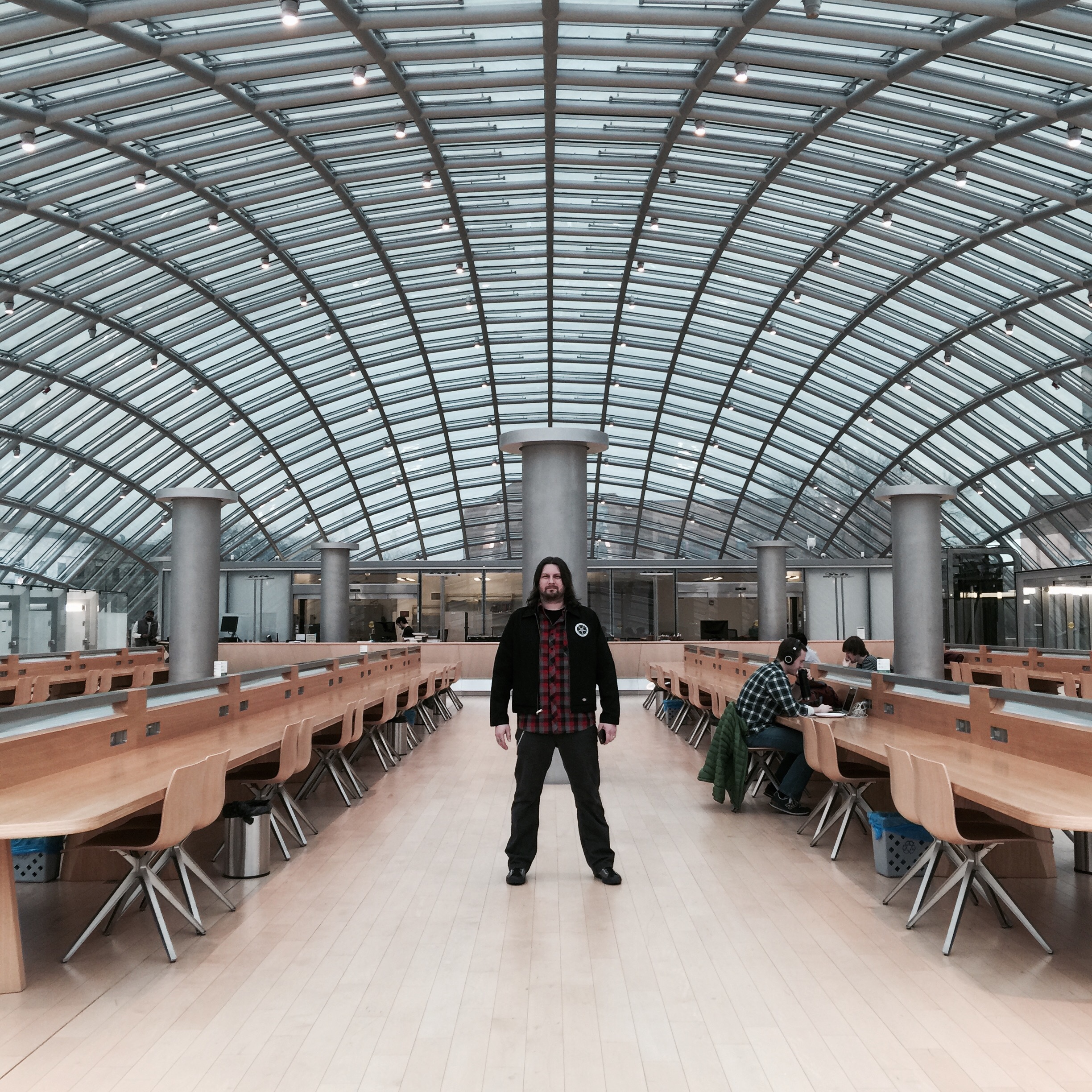